How to get to Far Lands in Minecraft Java?

The distant lands of Minecraft are not a Myth, they really exist in Minecraft, here we will explain how to get to them, without the need to install mods.We will also leave at the end of this article two maps, so you can access “Far Lands” with shortcuts. 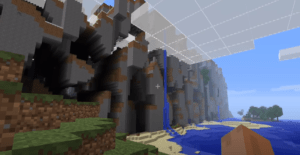 What happens if we reach the end of the world in Minecraft Java? If you explore too far, we are talking about hundreds of thousands of blocks away from the spawn, you will find the end of the world and this is only possible in java versions prior to 1.7.3, since in later versions a barrier will appear and it will only be possible to imitate the far lands with mods but they will not be the original ones.

How to reach distant lands in Minecraft Java 1.7.3 step by step?

The method of walking twelve million blocks as killocrazyman did, is not valid because it would take more than 830 hours of walking, so there is a method to reach distant lands.

The far lands are not available for versions higher than 1.8, nowadays you will only have one barrier. If you find a version of far lands higher than this version it is because they have been created with mods and are not the real far lands.

To get to distant lands follow the next steps:

2- Then you must go to the Start bar of your windows and enter %appdata%. This will open the AppData folder and there go to the .minecraft folder. Inside the .minecraft folder go to saves, where the worlds are saved and then to the folder of the world you have just created called Far Lands. So the path on your computer will be as follows: AppData > .minecraft > saves> Far Lands

3– In the folder with the name of your game, which you have named Far Lands, you should find and drag a file called level.dat to the next page:

4- After dragging the level.dat file to the page, we will open the folder that on the page will be shown as Data, then we will open Player and there we click on a file called “Pos 3 DoubleTag Entries“. This file marks the current position of your player.

5- You must double click on both the first file and the third file to change the coordinates. You will replace the displayed coordinates with the following coordinates: 12550700 . After replacing the coordinates, click on the Save button. The position number 2 can be changed to 80 until you test that you don’t die because of the height. 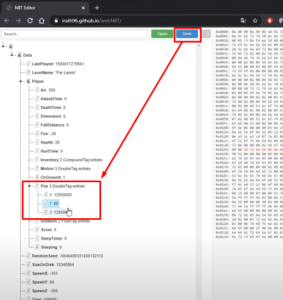 6- When you click on the “Save” button, a file will be downloaded and you must drag it back to the folder where you have created your world, i.e. the world called “Far Lands“. Remember that you must delete the old level.dat. If the new level.dat is called level(1).dat, you must rename it to level.dat.

7- Ready at the time of opening the game you will appear in Far Lands.

What happens if we reach Far Lands in Minecraft?

If you reach the far lands in Minecraft, the game will start to run slow, the game becomes unstable and you will do things like walk through walls and even see through them.

If you keep walking after the far land wall, anything can happen after you pass that wall, you can drown without water, you can fall infinitely, you will see mobs moving between the walls and even fly. You can even be unlucky enough to have your world corrupted.

This world is a bit strange because the playable part of the world is only 1000 x 1000 blocks.